After 30 plus hours on the train from Philadelphia to Tampa I finally made it home safely.  I want to thank you all for reading the few poems I posted, for liking them and for your comments, despite my not having a real computer and being unable to enjoy yours and answer comments.  I also have some new followers…welcome!

That’s the good news.  The bad news is that although I wanted to start reading and answering your comments, Tampa Bay is in a tropical storm/hurricane watch (welcome home!) and I will probably stay off the computer although I am hoping the electric power holds!  Hope this storm changes its mind and dissipates

Wow!  What was in that Veggiburger from the snack bar on the train ?  It was a jalapeno delight reminiscent of Homer Simpson’s night in the desert , the episode where he makes his chili and hallucinates .

It led to the ocean

The Atlantic Ocean could not exist in that place

But no mistaking it

Even in that space

Gray, cold with an undertow

Sand sucked right under the toes

So I sat and sniffed

Then realized the only explanation

Would be psychotic break

And it creatively tossed out

Multiple reasons for an ocean in the city:

“Stumbling through to a parallel universe”

On and on the reasons formed

Until I begged the mind to cease

Because who really knew?

Why not just enjoy the vision

And see where it led

Holding a notebook and pen

Glanced down, seeing myself

Maybe for my cremation

I should mention in my will

And a BIC CL I CK fine point pen

In my still fingers

In case I arise

And need to write a poem

Broke up with the guitar
Yeah, consummated
As predicted in my previous poem
Unconsummated Guitar *
But he’s not my type
Begged ukulele to take me back
He did,  so I upgraded him today
Must admit I fell in love with a banjolele
Played it but hey, only temporary madness
Somehow couldn’t imagine playing, well, Lennon’s Imagine
On a banjolele
Okay, I do have four ukuleles hanging on my wall
But I dragged one on the train for two days
And gave it to my granddaughter
Hoping someday she will play
Hoping she’s not like her grandma: flirty, flighty
Hoping she falls in love with the ukulele and never leaves him
Me? I went through terrible withdrawal this week
After giving mine away I was unable to play
For three days
Just HAD to buy this one
But I promise I won’t stray
It’s a ukulele all the way
And I won’t buy anymore
I’m happy
Really
Right ?

IMAGE: my new and improved ukulele

Last night I wandered into
A YouTube video
Or so I believed
Hometown visit from
The quiet of my Florida swamp
To the screeching insanity
Of the city I love
Straddling the past littered with ghosts
And an unknown future
Metaphored by vultures
Surfing the air currents
So the evening in World Cafe
Was already a bit unreal
Learned that videos are
A poor substitute for reality
Learned that the moon
Isn’t the only celestial magic wand
Learned that the sun not only
Bestows life to listeners
But also radiates its own
Energy
Via voice, violin, guitar, percussion
Live music
Palpable magic spell
Weaving words and melody so well
BeauSoleil creating its own place
Shining between time and space
As I willingly drifted
In their musical embrace…

Scrawled across my youthful Tabula Rasa

And solve a crime

Instead, I’m riding the Silver Star

From Tampa to Philly

In our modern drug and terrorist culture

That a murder will occur

Where is my Cary Grant

Lifting me to the top bunk

Dazzled by me on our honeymoon

How I envied Eve Marie Saint

In Hitchcock’s North By Northwest

But then, would probably be put off

How did they rein in their passion

And make love quietly on a train?

I’m not a screamer, or much of a moaner,

But certainly not silent

No missionary positions for me…

Being alone isn’t so bad

Bit bored, but not bored

With the magic of City of New Orleans

But I’m a realist

No Arlo talent in my brain or hands

But maybe on this sleepless night

The seeds of something important

Will spring from my pen

But if not, well,

You just shared a glimpse of my silly

To my blogging friends at WordPress:

I am leaving for a week’s vacation tomorrow (Sunday), taking the train from Tampa to Philly, for a much-needed visit to see my sons and granddaughter.  Since I’m dragging an overpacked suitcase, backpack weighing 50 pounds and a ukulele, I will rely on my Kindle Fire and T-Mobile to stay connected.  My son has a computer that I can use but because we’re sharing, I will not be able to spend time reading your exceptional works.  I promise to try and catch up when home again although it will be Mercury Retrograde by then and communications are a bit skewed that month.  Anyway, thanks for all your incredible support.  As I told a poet friend, your poems are like rich oil paintings, compared to my “charcoal sketches,” so your likes and comments are much-appreciated!

Wishing us all love and peace, Clarissa

I, a dusky cocktail shaker of Romani

And a hint of Hun

Where babies in baskets

Dream on the cold wood stove

Until children of age

Waiting for me to be

Old enough for you

Under my fringed shawl

Skin growing paler with each taste

Eternal bliss with you…

Green not a color but a

Fish me out of this prison

Where I can neither swim nor run

Fusing together as one…

Reblog of last year’s poem during the Perseids Meteor showers. This year the sky was cloudy and the moon was very bright so didn’t get to see much at midnight. At 3 am, could see them faintly. Maybe next year… 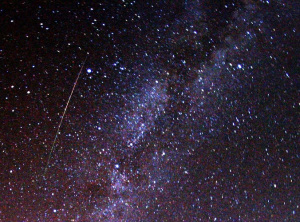 In the mythology of

It is lucky to watch

To peer between the canopy

Woven by a family of

At least fifty feet in the

Reaching for each other

So who could feel impatient

Even though the Perseids will remain hidden

In the northeastern sky?

On the other hand

In the folklore of comets

It is unlucky to see one

It would be true

For one who came into the world

With the tongue and wit

And would leave the same way.

Yet William the Conqueror

(Remember that date in