Wrote this as an introduction to my Drab Lil book in 2013. When I deleted my first WordPress blog, this was “lost” from the internet.  In celebration of Carlos Ruiz  Zafon’s newest book in the Cemetery of Forgotten Books series (Labyrinth of the Spirits) I am posting the sonnet I wrote when publishing my first book.  Can’t wait to read Zafron’s book!

Will it take a century to be read
Just like the Book of Talismans I found?
A hundred years lying like the undead
Surfacing in the dark of night, unbound?

Or will it wait upon a shelf somewhere?
Or molder on the web’s ancient server?
Discovered by a person who will care,
Or public domain miners with fervor?

The Cemetery of Forgotten Books
As created by Carlos R. Zafon
Is modernized in Kindles and in Nooks
And would serve as the perfect stepping stone.

So here is my book for posterity
Please try to read it with sincerity!

Grimoire
Magic spell book
But aren’t most books
Enticingly magical?
Most writers want to
Weave a spell
Enchant the reader
An alphabet put together
Interpreting the
Arcane codes
True, some are more
Grimoire-y than others
But the hope is always the same
Book of Shadows
For memories to reclaim

Anyone could make a
Physical book
Cutting, pasting
Dreaming
Mine contains words
Pictures
Photos
And amulets in drawstring pouches
What will you make?
It is the book that will
Define your legacy
The hand prints on
The door of our universe
Saying, “I WAS HERE”

Another lonely night
Riffling through pages
Scanning the list
Of Love Potions
Devastated from rejection
Needed him back
But would I want him
Under magical circumstances?
No, I want real love
Equal partnership
No controlling
No binding
Free choice
As I expect it for me
So I rejected that conjuration
For whomever needed to put
General love into their life
And splashed through the
Outgoing tides
Searching for the Sea Henge
Upside down tree of life
Teach me, I breathed
How to survive
Alone

Sick next day but not in bed
Probably sadness put it in my head
Sat shivering over my Grimoire
And there
In plain English
Well, mostly
Was the Ena Drab Farmeko*
Nine-herb charm
The secret cure
In my backyard
Or in fields and forests
Swamps and even health food stores
Found bits and pieces of the herbs
Stirred, sieved, suffused
Sipped, slept
Earth’s magic
Strengthening my resolve
To evolve into
A perfect balance
Of marbleized black and white
A swirling mixture
Of Yin and Yang
As my voice sang out
In harmony

Oh, the spirit
Belief, relief
In caring about the world
And all contributing to
The Buzz
Of a vibrant planet
Paper, wood
Instant campfire
Envy of embers
Help us see
Each other as real
Blazing through the dark
Bright, straight, strong
But alone
Hoping it will smoulder
Giving the cold heat shoulder
Resentful hot hatred
Scorches, sears, singes
In order to extinguish
A lone flame
What price incandescence…

*ENA DRAB FARMEKO (for those interested in simple herbs)
https://poeturja.wordpress.com/2015/07/16/ena-drab-farmeko-nine-herb-charm-2/

The Florida State Poets Association published Cadence Anthology #35.  I am honored to have a poem included!  Here is the Amazon link:

The Bards Against Hunger 5th Year Anniversary Book is now available through Amazon or the Bards Against Hunger organization.  The project has raised thousands of pounds of food over the last 5 years to help local charities and food shelters in many different states. You may help support them by buying a book or organizing an event in your state or country.

I am honored to have one of my poems included!  It is a true memoir written as a member of the working poor, who also go hungry, especially when money is needed for emergency situations.  One of our fellow-WordPress poets, Denise Fletcher, also has a poem included.  Check out her blog, especially what she calls “Mood Boards”:

Here are the links for the book:

Okay, I’m childish, but I really dislike trolls (or maybe rude know-it-alls). So I wrote this Amazon review for my newest songbook in protest to another reviewer’s put-down.  It turned into a poem, then I got carried away and added in Beach Boy titles.  Not my greatest work but here it is, for your morning smile (I hope):

PROUD TO BE A “CAMPFIRE” UKULELE-IST, June 3, 2016
By
Clarissa Simmens
Verified Purchase(What’s this?)
This review is from: The Beach Boys For Ukulele (Paperback)
A troll or just rude, reviewed this songbook, sneering at chorders, so I took a look. How lucky am I that ukulele chords are in? I can’t read music, is that such a sin? He called us some names (we’re the “campfire crowd”), we strum our babies, we’re all so proud. How lucky am I to have taught myself to play! Having fun, fun, fun even though he says nay! This book is perfect for advanced or new. Don’t worry baby, just play, and remember, to your school be true. God only knows how hard we newbies go. I hide out in my room, wishing to be in Kokomo. If you want a challenge rewrite the musical translation. But I’ll stick with the original because I feel those good vibrations! 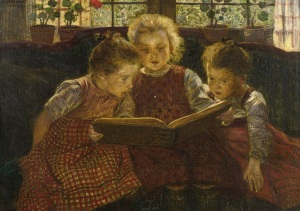 Father brings her to the Beast

Soon to be a prince…

Is a ladder for her prince

Love will conquer all…

But walks into the wrong book

So much for a ten-year-old to process

Lying on my aunt’s bed

Looking to hide from the ever-chattering

Ever-growing, family of grandma and

Heat turned up to 85 degrees in the small house

As a freezing Philadelphia snow storm raged outside

My aunt, between marriages, living here

Her room a haven from migraine and madness

Leafing through, stopping at

The Adventure of the Speckled Band

What words in one title

Not “The Case” but “The Adventure”

What an adjective! No one I knew used that word

And although I read countless books

Too rich to leave to my imagination

Ah, here is a dictionary

Lying beside my aunt’s crossword puzzle

“Speckled: marked with a large number of

Small spots or patches of color”

My vocabulary growing as I floated through the book:

My love affair with a man so different from

A man so encased in logic

Needing the sob of a violin

His anchor to all that transformed the world into beauty

I became jealous of John Watson

The only person who knew his soul

I became jealous of Irene Adler

The only woman he ever loved

I became jealous of his mind

His pathways of perception

Late that night my parents

Appeared to part me from

I clutched the book

My aunt, wise and generous, gifted it

One of my first doors to stumble through

Decades of wandering in delight

The only man I ever loved